Builder confidence in the 55+ housing market improved the fourth quarter of 2012 compared to the same period a year ago, according to NAHB’s  latest 55+ Housing Market Indices (55+ HMIs).

There are separate 55+ HMIs for two segments of the 55+ housing market: single-family homes and multifamily condominiums.  Each 55+ HMI is based on a survey that asks if market conditions are good, fair or poor. An index number below 50 indicates that more builders view conditions as poor than good.

Although both 55+ HMIs remain below 50, both have improved significantly from a year ago.  The single-family index increased 10 points to a level of 28, the fifth consecutive quarter of year over year improvements.  Although multifamily condos remain the weakest segment of the 55+ housing market, the 55+HMI for condos also showed a substantial year-over-year increase, of six points to 19. 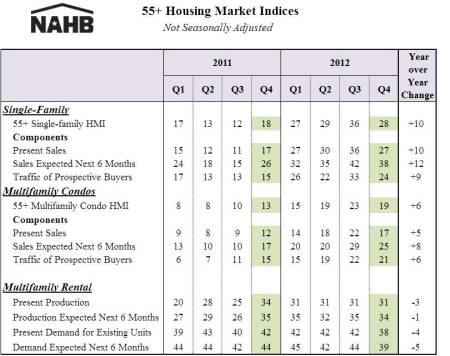 Meanwhile, the 55+ multifamily rental indices, which had already recovered substantially in 2011, remained relatively stable in the fourth quarter, although there was a slight pullback due to uncertainty about the low-income housing tax credit—the financial driver behind a significant portion of apartments built for this segment of the market. Present production dropped three points to 31, expected future production dipped one point to 34, current demand for existing units dropped four points to 38 and expected future demand fell five points to 39.

Like the overall housing market, the 55+ segment of the market is undergoing a slow but steady recovery, but there are some obstacles to a continued and stronger recovery.  While problems with tight credit conditions for buyers and obtaining accurate appraisals are still lingering, new problems like spot shortages and rising costs for labor, materials and lots are beginning to emerge.

CPI Mostly Unchanged for Second Month in a Row

The Bureau of Labor Statistics reported that the Consumer Price Index for All Urban Consumers (CPI-U) held steady in July. Overall, the CPI-U has remained either unchanged or declined in each of the last four months. Energy prices slipped 0.3% in July, putting more downward pressure on topline CPI.  The next couple of months of readings on overall CPI will likely be stronger, however, as gasoline and natural gas prices have surged in recent weeks.

Core CPI, a measure that excludes volatile food and energy prices from the calculation, posted its smallest month-to-month increase since September 2011. Year-over-year growth in core CPI still points to a very tame rate of increase in non-food and non-energy price levels, with the latest reading of 2.1% the third consecutive month this metric has decelerated versus to its year-ago level.

The shelter index, which serves as a crude measure of overall housing costs, rose for the 28th consecutive month; however, each of those increases have been modest (including the 0.1% gain in June), leaving the shelter index only 2.1% above its year-ago level. In order to more closely assess trends in rental housing costs, NAHB constructs a real rent index from the CPI for rent of primary residences and overall CPI. This metric has registered four consecutive month-to-month increases, with the latest gain coming in at 3.3% on an annualized basis. 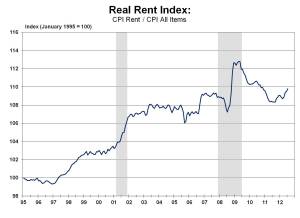 In the first quarter of 2012, NAHB’s Multifamily Vacancy Index (MVI) dropped to 31, the lowest it’s been since the inception of the index in 2003.   As the MVI captures industry sentiment about vacancies, a decline in the index signals overall improvement in the market for existing rental apartments.

The MVI is a composite measure of multifamily property owner/manager sentiment about vacancies in Class A, Class B, and Class C apartments.  Each component lies on a scale of 0 to 100, where any number below 50 indicates that more owners and managers report conditions are improving than report conditions are getting worse.   All MVI components have been below 50 since the first quarter of 2010.

The strength in the first quarter of 2012 seemed concentrated in the upper tiers of the market.  The MVI components tracking sentiment on Class A and Class B vacancies each declined by 4 points—to 29 and 30, respectively.  This is the lowest point ever for the component on Class vacancies, and the second lowest for the Class B component.  Meanwhile, the component for Class C vacancies ticked up to 42.

Over its 9-year history, NAHB’s MVI has tended to foreshadow movement in the Census rental vacancy rate for buildings with 5 or more apartments.  In the third quarter of 2011, for example, the MVI was indicating stability to slight improvement in the market while the 5-plus vacancy rate increased substantially.  The movement in the Census series proved to be a temporary anomaly, however, and now both series are trending downward—with the MVI showing a slightly stronger downward trend in the first quarter of 2012.

For more information, including a longer history for all components of the MVI, see the web page for NAHB’s Multifamily Production & Vacancy Indices.

Given the increasing focus with respect to growing demand for rental properties, we thought we would present the breakdown of the rental housing stock by structure type. Using the 2009 American Housing Survey, the data show that 30% of all housing units in the United States are renter-occupied or vacant for-rent.

Subtracting out manufactured housing units, this leaves only 44% of rental housing due to traditional multifamily apartment buildings of five or more units.

Looking within the structure categories, the traditional expectations emerge. Only 14% of single-family homes are rental units. But more than 80% of housing units in 2+ unit buildings are in the rental housing stock. 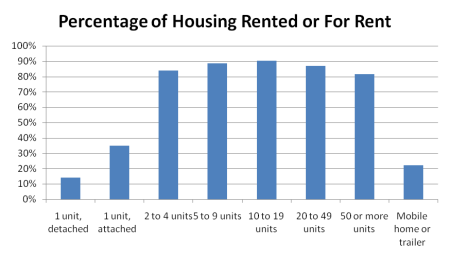 These percentages are useful to keep in mind when examining discussions of rental housing: it is not entirely a multifamily building narrative. And this analysis is based on 2009 AHS data. In the intervening period, the share of rental housing stock has grown, particularly for those types of housing that have been traditionally owner-occupied.