Housing’s Other Contribution to GDP

Housing added 0.7 percentage points to real GDP growth in the first quarter of 2014, however the construction component (residential fixed investment) detracted from growth over the past two quarters owing to the poor weather conditions seen across the country over the period. In addition, housing accounted for 15.6 percent of total real GDP, which is low from a historical perspective.

The price component of GDP is becoming more interesting, however. Starting in 2012, housing has been contributing more to prices, for the most part, as seen in the figure below. In the first quarter of this year, it added over 0.7 percentage points to growth in the GDP price index, led by nearly 0.5 percentage points in the construction component (the most since the third quarter of 2008); the overall price index rose 1.3 percent. This is partly due to increased construction costs and higher rental prices. 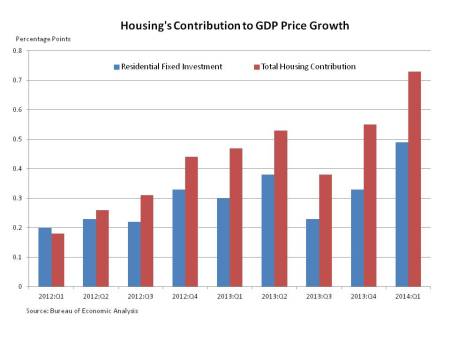 Currently, overall inflation remains subdued and is within the Federal Reserve’s comfort zone. But moving forward, if housing becomes an even larger share of GDP, it would likely place upward pressure on inflation measures in general.

Catch Me If You Can

House prices grew by 10.8% between April 2013 and 2014, according to the S&P/Case-Shiller 20-City Composite Home Price Index, which was less than the 12-month growth rate of 12.4% seen in March. Similarly, the Federal Housing Finance Agency’s Purchase-Only Index rose 6.0% compared to 6.4% in March. On a seasonally-adjusted monthly basis the 20-City Composite index increased by 0.2%, while the Purchase-Only index was virtually unchanged. Both indices show that annual house appreciation has slowed over the past five consecutive months ending in April and suggest the housing market may be returning to its long-run trend of growth. 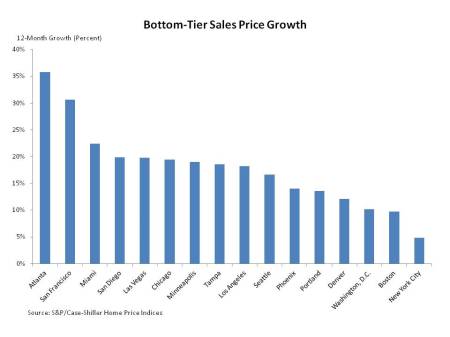 The growth rates may be inflated, however, due to previously distressed homes being resold. For instance, CoreLogic provides a comparable house price index to the S&P/Case Shiller series and also has an additional one that excludes distressed homes. Foreclosed properties generally sell for a discount, currently at around 18 percent in April, according the National Association of Realtors, which suggests they would weigh down the overall market index. Yet since 2012, it appears distressed sales have added to the market’s growth, as seen the figure below.

What’s occurring is during the housing crisis, many homes were foreclosed upon. In fact, the number of homes in foreclosure eventually peaked in the first quarter of 2010 at over two million, based on data from the Mortgage Bankers Association. These foreclosed homes were bought at deep discounts, ranging up to 40 percent and even higher in certain areas by 2009, as the chart above indicates when distressed sales are included. However, once the homes were repaired and later sold again either in the near-term for profit or when the new homeowners decided to move, the sales price was dramatically higher than the original price, owing to those heavy discounts. And as house prices recovered in general, those who waited longer to sell saw even larger increases in their sales price relative to the original purchase price. For instance, over the 12-months ending in April of this year, the inclusion of distressed properties added over two percentage points to overall growth in the price index, but the actual sales price for those troubled homes was likely at or below those of comparable non-distressed homes. So, this is more of a catch up to the race than a grand spree in house prices.

For full histories of the FHFA US and 9 Census divisions, click here.

For full histories of the composites and 20 markets included in the Case-Shiller composites, click here

According to the MBA, its BAS tracks application volume from mortgage subsidiaries of home builders across the country and participants in the survey collectively account for approximately 20.0% of new home sales based on the Census Bureau estimates. The MBA also notes that since the mortgage application is typically made around the same time that the sales contract is signed, capturing the number of mortgage applications will give an indication of new home sales.

Incorporating the results of the BAS, the MBA estimates a not seasonally adjusted level of 36,000 new home sales and a seasonally adjusted annual rate of 374,000 new home sales in May 2014. This is an interesting project that MBA has taken on, constructing an analogy to NAR’s pending home sales index, for newly constructed single family homes, based on mortgage applications. It’s a relatively new project so the history of the index is short, but it will be interesting to see how the index performs as a predictor over time. 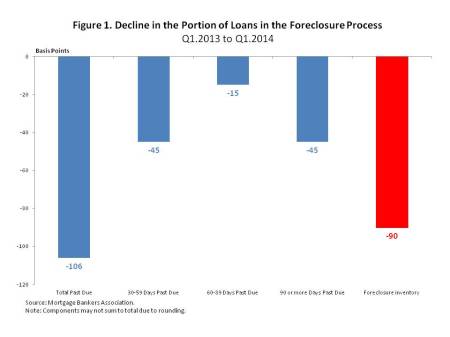 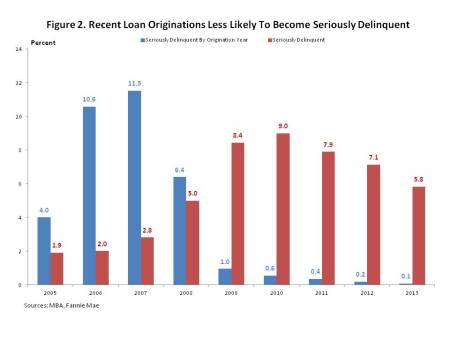 The Federal Reserve Bank of New York recently reported that aggregate consumer debt, which includes mortgages, rose by 1.1% or $129 billion over the first quarter of 2014. There is now an estimated $11.7 trillion in aggregate consumer debt outstanding. Total consumer indebtedness has now risen for 3 consecutive quarters; however, it still remains 8.1% below its peak of $12.7 trillion that was reached in the third quarter of 2008.

The first quarter decline in credit card debt follows a recent period of nearly imperceptible growth. The most recent iteration of the Federal Reserve Board’s Senior Loan Officer Opinion Survey contained a set of special questions about factors that affected banks’ consumer credit card loan growth because it noticed that “after contracting for several years, credit card loans on banks’ books grew modestly in 2013, a bit less than 1 percent,amid a moderate pace of expansion in economic activity.” In contrast, “between the years 1998 and 2007, the Federal Reserve Board’s Assets and Liabilities of Commercial Banks in the United States showed that aggregate consumer credit card loans on banks’ books grew about 6 percent annually, on average.”

What Has Happened to Builders’ Profit Levels?

Every couple of years, NAHB Economics asks single-family builders nationwide to provide data from their income statements and balance sheets so that industry-wide benchmarks on profit margins, asset and equity positions can be determined.  Results from the recently released Cost of Doing Business Study: 2014 Edition show that margins in 2012 improved over 2008 and 2010, but are still lower than in 2006.

The Pending Home Sales Index (PHSI), a forward-looking indicator based on signed contracts, fell a steep 5.6% in September 2013 to 101.6 from a downwardly revised 107.6 in August. The September 2013 PHSI reported by the National Association of Realtors (NAR) was 1.2% lower than the same period a year ago. 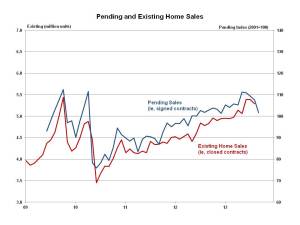 The PHSI has declined for four consecutive months, and the September PHSI decreased to the lowest level since December 2012. It is worth noting that existing homes sales are reported on a contracts closed basis, so they reflect market conditions with a longer lag than pending sales. These new data suggest a decline in existing home sales for the rest of the year with no upward lift going forward into 2014.

The government shutdown took a toll on consumer confidence. That decline could prove to be temporary depending on how the ongoing budget negotiations in Congress play out over the final course of 2013.

Over the long run, economic and housing data continue to describe a modest recovery for housing that will lead to higher levels of construction activity in the years ahead. While recent information illustrates that there will be ups and downs along the way, demographic growth and constrained housing inventory will support housing demand going forward.

According to the latest data from the Census Bureau, taxes paid by homeowners and other real estate owners remain the largest single source of revenue for state and local governments. At 34%, property taxes represent a significantly larger share than the next largest sources: individual income taxes (24%) and sales taxes (21%).

State and local government property tax collections continue to increase on a nominal basis. From the third quarter of 2012 through the end of the second quarter of 2013, approximately $479 billion in taxes were paid by property owners. This was a small increase from the previous trailing four-quarter record of $477 billion, set last quarter.

The modest changes throughout the Great Recession in nominal state and local government property tax collections are due in large part to lagging property assessments and the ability of local jurisdiction to make annual adjustments to tax rates. In general, declining property values are not reflected in the system until a few years after the decline occurs. Once assessments are updated, property tax authorities can adjust rates thus maintaining a desired level of collection.

Existing home sales decreased 0.6% in March from a downwardly revised level in February, but were still up 10.3% from the same period a year ago. The National Association of Realtors (NAR) reported that March 2013 total existing home sales were at a seasonally adjusted rate of 4.92 million units combined for single-family homes, townhomes, condominiums and co-ops. That compares to 4.95 million units in February, and 4.46 million units during the same period a year ago. 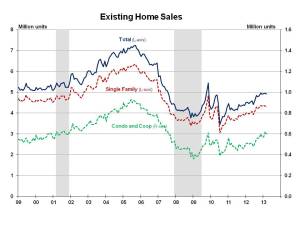 The total housing inventory at the end of March increased 1.6% from the previous month to 1.93 million existing homes for sale. At the current sales rate, the March 2013 inventory represents a 4.7-month supply compared to a 4.6-month supply in February, and a 6.2-month supply of homes a year ago. The March inventory of condominiums/co-ops, by contrast, decreased 4.1% from February to 4.7 months.

Some 21% of sales in March 2013 were distressed, defined as foreclosures and short sales sold at deep discounts. This level was down from 25% in February and 29% during the same month a year ago.

The increase in March inventory suggests that rising prices are inducing more households to place their homes on the market, after previously holding back because of low prices. Those same rising prices may be dampening the enthusiasm of investors and cash buyers whose participation declined in March.

The moderating of March existing home sales was consistent with the 0.4% decrease in the February 2013 Pending Home Sales Index.

The Pending Home Sales Index, a forward-looking indicator based on signed contracts, decreased 5.5 percent in April 2012, from a downwardly revised 101.1 in March.  This decline was preceded by three consecutive months of gains. However, the April PHSI was 14.4 percent higher than in April 2011.

If contracts closed at the same time they were signed, this graph would be the correspondence between sales and the PHSI. So the PHSI is a good indicator of what is likely to happen with existing home sales which are the contract closings. We anticipate that May and June existing sales that will be reported on June 21, 2012 and July 19, 2012, will reflect the closing of contracts signed.

Eye on Housing
Blog at WordPress.com.