The Employment Situation for May – A Milestone of Sorts

With the May numbers reported today payroll employment has officially surpassed the pre-recession peak of 138.365 million, by 98 thousand.

The Bureau of Labor Statistics (BLS) released the Employment Situation report for May. The establishment survey showed payroll employment expanded by 217,000. The April figure was revised down by 6,000 and the March figure was unchanged.

From the household survey, the unemployment rate held at 6.3%, but the addition of 192,000 to the labor force put some welcome upward pressure on the rate. That’s a good thing. Most analysts agree the unemployment rate overstates the health of the labor market because the labor force participation rate has declined significantly since the recession began and has yet to recover. The Federal Reserve abandoned the 6.5% threshold for the federal funds rate in recognition of this disconnect.

At this point a very positive (and much anticipated) labor market development would be for payrolls to continue expanding at a pace of at least 200,000 per month and the unemployment rate to hover at the current level (if not increase) as discouraged workers return to the labor force.

Passing the pre-recession peak is an accomplishment but with a depressed participation rate and still elevated levels of long term unemployment and under-employment there is still plenty of room for improvement. 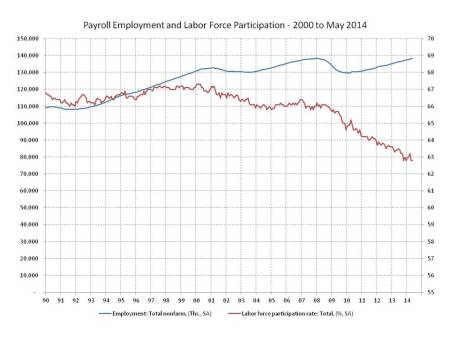 This entry was posted on Friday, June 6th, 2014 at 4:42 pm and is filed under Data. You can follow any responses to this entry through the RSS 2.0 feed. You can leave a response, or trackback from your own site.