Producer Prices in January – Big Changes at the Top, Not Much at the Bottom

The Bureau of Labor Statistics (BLS) released major changes to the Producer Price Indexes (PPI) program with the data for January. The objective was to realign the aggregate indexes with the contours of a dynamic economy, incorporating indexes for services, construction, government purchases, and exports into the broader aggregate indexes. (For more information see new PPI.) The results show a little less core inflation (excluding food and energy) at the producer level, but the same pattern of prices driven by swings in energy prices over the last few years. 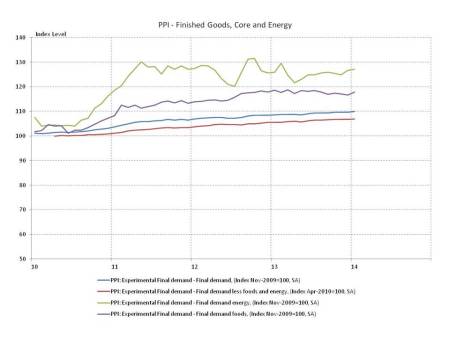 Overall, inflation at the producer level maintained its modest pace, rising 0.2% in January from December, and 1.2% for the 12 month period ending in January.

The PPIs for individual building materials were unaffected by the changes to the aggregate indexes. Softwood lumber prices moved up modestly in January after softening at the end of 2013. OSB prices firmed slightly after steep declines from early 2013 peaks.

Gypsum prices jumped 7.4% in January from December, a significant down payment on the price increases some producers announced for the coming year. This increase brings gypsum prices to 99.5% of their housing boom peaks.

This entry was posted on Friday, February 21st, 2014 at 5:21 pm and is filed under Data. You can follow any responses to this entry through the RSS 2.0 feed. You can leave a response, or trackback from your own site.

One Response to Producer Prices in January – Big Changes at the Top, Not Much at the Bottom