In September, interest rates on conventional mortgages used to purchase newly built homes increased for the fourth month in a row, according to data released today by the Federal Housing Finance Agency (FHFA).

During the month, the average contract interest rate increased by 10 basis points to 4.30 percent, while initial fees increased to 1.14 percent (from an average of 1.06 percent the previous month).  The combination drove FHFA’s key measure of the average effective interest rate on new home loans (which amortizes the initial fees and incorporates them into the rate) up by 11 basis points to 4.44 percent—the highest it’s been since July of 2011 (the month prior to a substantial 36 basis point drop). 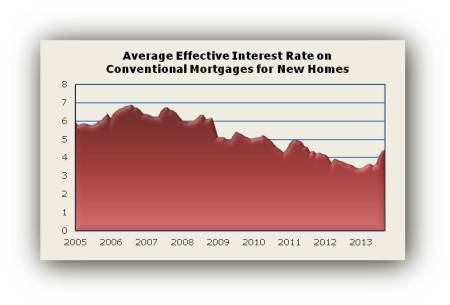 The FHFA release also includes data on loan size and house prices, and the averages on both for newly built homes declined in September.  The average price of a new home purchased with a conventional mortgage declined by $11,900 to $388,500.  (The average price depends on the mix of new homes purchased with conventional loans during a particular month, in addition to anything that may be happening to house prices in general.)  The average amount of the loans showed an even more pronounced decline of $13,500, taking it down to $294,800. 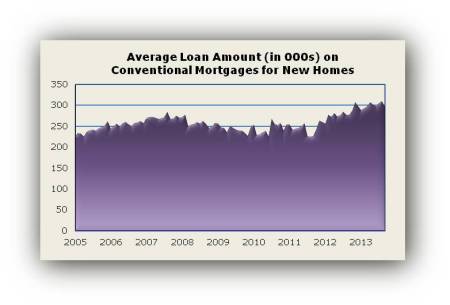 As the above numbers imply, the average loan-to-price ratio on conventional mortgages used to purchase new homes also declined in September—down to 77.5 percent, after three consecutive months during which it remained above the 78 percent mark. 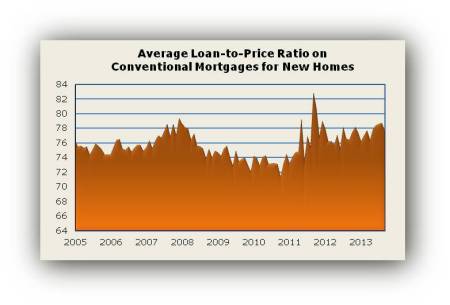 This information is based on FHFA’s Monthly Interest Rate Survey (MIRS) of loans closed during the last five working days in September.  Rates and other terms on loans are usually set 30 to 45 days before the loans actually close.  For other caveats and limitations of the survey, see the technical note at the end of FHFA’s October 29 news release.

This entry was posted on Tuesday, October 29th, 2013 at 9:47 am and is filed under By the Numbers, Data. You can follow any responses to this entry through the RSS 2.0 feed. You can leave a response, or trackback from your own site.