New home sales have shifted from purchasing completed homes in inventory to purchasing homes still under construction and even homes not-yet-started. The shift is a product of several trends.

Eight-in-ten new home buyers already own a home and have often refined their choices to the point where the current inventory does not fit their needs. A completed home does not allow for individual choices in upgrades, finishes and colors.

Builders slowed starting new homes and sold inventory to reduce their overhead, often at the lender’s insistence. As a result, the number of for sale completed new homes dropped to a 40-year record low in June at 35,000. For comparison, the average from 1993 to 2003 was 2.5 times that level at 89,000. As builders reduced their inventory of completed homes, additional sales had to come from not-yet-started or under construction categories.

Builders continue to meet resistance at traditional sources of credit so one way around lenders’ reluctance is to couple the loan application with a signed contract or to have the buyer obtain a construction-to-permanent financing loan based on the purchaser’s credit. The use of construction-to-perm loans has increased from one-fifth of the market in 2010 to one-third in the second quarter 2013.

Over the recent cycle, the shift has been dramatic. Completed homes were half the sales in 2008 as sales slowed but inventory kept building. The average since 1963 is 36%; the level reached in 2012 but continued to fall to 29% by mid-2013. Conversely, homes sold but not-yet-started comprised 21% of the sales in 2008 compared to an historic average of 26%. That share rose to 31% in 2012 and to 37% by mid-2013. Homes under construction comprised less than one-quarter of homes sold in 2008 but now make up more than one-third of sales. 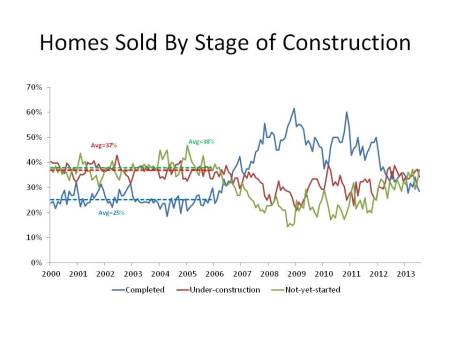 The shares of homes sold by state of construction have settled back toward the shares established in the early 2000s but not to the trends in the 1960s and 1970s when the not-yet-started share was less than one-fifth and under construction was at least 40%. From just after the 1973-75 recession until the boom of the mid-2000s, the share of homes sold that were under construction averaged 38% while the share sold completed took a long term decline from 40% to 25% and that shift was taken up by selling before the home was started. 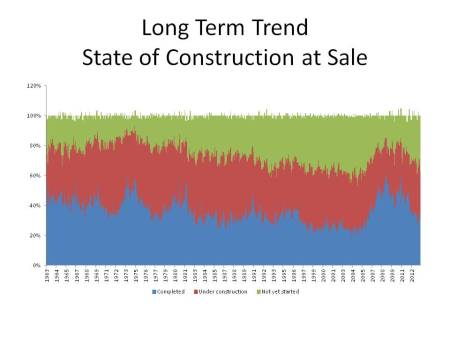 One likely explanation of the long term trend was the rise in concentration of larger building companies that could hold an inventory of models and lots for buyers to choose from without having to risk building ready-to-occupy homes that did not fit buyers’ preferences.

In addition, the savings and loan industry where builders traditionally went for construction loans began to tighten underwriting requirements forcing builders to rely on signed contracts for loan security. Those requirements ramped up significantly after the collapse of the S&L industry in the late 1980s.

This entry was posted on Thursday, August 29th, 2013 at 10:14 am and is filed under Data. You can follow any responses to this entry through the RSS 2.0 feed. You can leave a response, or trackback from your own site.