As of 2012, FHA/VA insured loans still account for well over 20 percent of the market for new single-family homes, according to data from the Survey of Construction (SOC).

The SOC is conducted by the Census Bureau, partly funded by HUD, and the source of the familiar monthly series on housing starts.  Among other things, the SOC collects information on the type of financing that has been or will be arranged for new homes.  Builders have the option of checking a mortgage insured by the Federal Housing Administration (FHA), a mortgage insured by the Veteran’s Administration (VA), conventional financing (i.e., a mortgage not insured by a government agency like FHA or VA), cash, and “other.”

During the peak years of 2005 and 2006, conventional loans accounted for over 85 percent of the new home market.  With the subsequent financial crisis and housing downturn, the conventional financing share dropped sharply to under 60 percent.  Cash and “other” made up part of the difference, but the increasing share of loans insured by FHA and VA was particularly dramatic—from 5 percent in 2006 to as high as 27 percent in 2010. 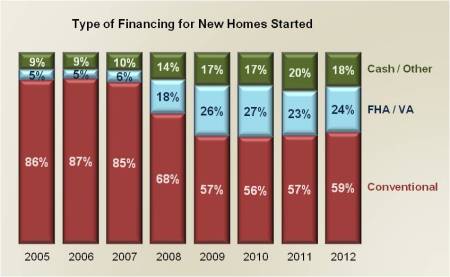 The policy implication is clear.  During boom times, government insured mortgages may seem unnecessary, but the insurance is sorely needed to prop up activity during a severe downturn.

This and other characteristics of new single-family homes started in 2012 are discussed in NAHB’s August Special Study in HousingEconomics.com.

This entry was posted on Wednesday, August 7th, 2013 at 9:31 am and is filed under By the Numbers, Data, Issues, Policy, Studies. You can follow any responses to this entry through the RSS 2.0 feed. You can leave a response, or trackback from your own site.