Government employment data indicate that the count of construction sector job openings for the months of 2013 is the highest since 2008. While the increase in unfilled positions is consistent with the uptick in construction sector activity, particularly for home building, the data reflect only modest increases in total employment thus far.

For the construction sector, Job Openings and Labor Turnover Survey (JOLTS) data from the Bureau of Labor Statistics (BLS) indicate that gross hiring rose to 307,000 in May from 283,00 in April. However, the hiring rate, as measured on a 3-month moving average basis, has been slowing since the start of 2013. 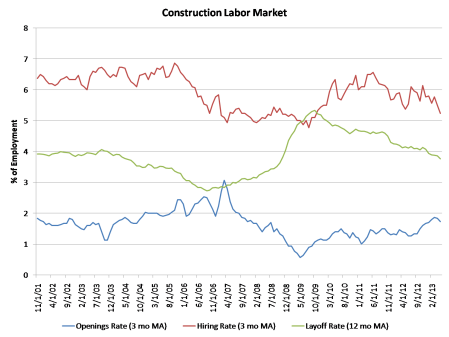 Consistent with reports of some labor shortages for builders, the number of open, unfilled positions in the construction industry remains near post-Great Recession highs. The number of unfilled positions in the sector stood at 103,000 in May, marking four of the last five months for which the total number of open positions was greater than 100,000. This is the first time this has occurred since 2008. Successfully filling open positions with qualified workers is a top concern for home builders in 2013.

The May job openings rate (open positions measured as a percentage of current employment) for construction was 1.7%. Measured as a three-month moving average, the openings rate (the blue line above) has staged a noticeable rise since September 2012. Combined with a declining sector layoff rate (nonseasonally adjusted), charted as a 12-month moving average in the graph above, these factors suggest more net construction hiring in the months ahead – if firms can find workers with the right skills.

Monthly employment data for June 2013 (the employment count data from the BLS establishment survey are published one month ahead of the JOLTS data) indicate that total employment in home building stands at 2.133 million, broken down as 585,000 builders and 1.548 million residential specialty trade contractors. 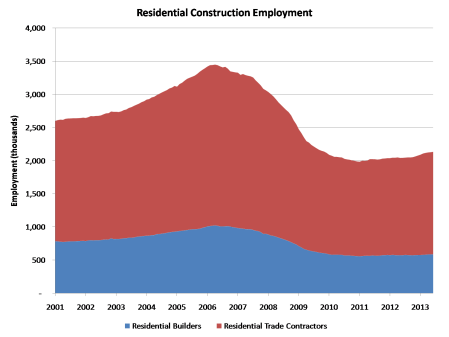 According to the BLS data, over the last 12 months, the home building sector has added 90,000 jobs. Since the point of peak decline of home building employment, when total job losses for the industry stood at 1.466 million, 149,000 positions have been added to the residential construction sector.

While employment growth for the sector is not expected to occur at rates seen for the growth in overall building activity, the current level of improvement for total employment remains a puzzle. This small amount of job creation could be due to increased hours for existing workers, but if true, this is not a sustainable situation. Expected increases in building should lead to further growth in residential construction employment over the course of the year. Thus far in 2013, home building employment is averaging monthly growth of about 9,000.

For the economy as a whole, the May JOLTS data indicate that the hiring rate was relatively unchanged at 3.3% of total employment. The hiring rate has been in the 3.1% to 3.4% range since January 2011. The job openings rate was also unchanged at 2.7% in May. 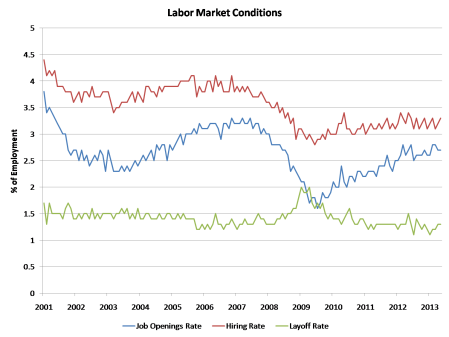 This entry was posted on Tuesday, July 9th, 2013 at 10:47 am and is filed under Data, Issues. You can follow any responses to this entry through the RSS 2.0 feed. You can leave a response, or trackback from your own site.