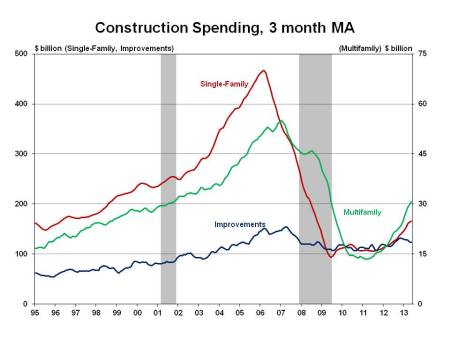 Finally breaking the decline that started in January 2013, home improvement spending also registered gains. Remodeling spending increased to an annual rate of $124.2 billion, 1.9 percent above the April reading, 7 percent above the year ago, but still below the spending rate registered during the first quarter of 2012.

This entry was posted on Monday, July 1st, 2013 at 11:35 am and is filed under By the Numbers, Data. You can follow any responses to this entry through the RSS 2.0 feed. You can leave a response, or trackback from your own site.

22 Responses to Single-Family, Multifamily, Home Improvement Spending All Up