A study published in June  presents evidence in support of NAHB’s policy, which classifies a change in building codes as cost effective if it returns at least 10 percent in energy savings the first year.

The study argues that a common alternative to NAHB’s policy, using the current mortgage rate to evaluate energy efficiency, is an unrealistic assumption and produces unrealistic results.  In particular, taking the mortgage rate to be representative of the rate of return home buyers require fails to capture borrowing constraints and doesn’t reflect the way buyers actually evaluate alternatives when deciding on which features to include in a new house.

The study presents evidence from three different sources indicating that the rate of return that drives most home buyer decisions is much higher (summarized in the chart below). 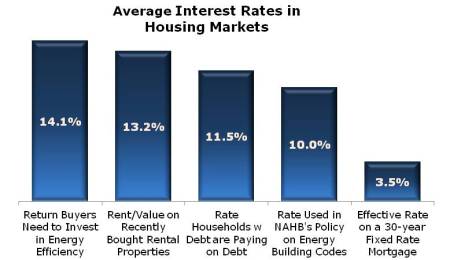 Notice that the 10 percent return in NAHB’s policy is slightly below the rates from these three sources, but is at least in the general neighborhood.  The current mortgage rate, on the other hand, is far too low at under 4 percent.  Using a rate this low to evaluate savings on utility bills will classify as cost effective some features that are clearly priced higher than the market will bear.

The study also shows that rates of return should be higher at the affordable end of the housing spectrum—where first-time buyers and buyers with modest incomes are likely to be living paycheck to paycheck and therefore need a higher return in exchange for an immediate sacrifice.  Further details, including documentation of data sources, are available in the full study.

This entry was posted on Friday, June 28th, 2013 at 9:10 am and is filed under By the Numbers, Data, Issues, Policy, Studies. You can follow any responses to this entry through the RSS 2.0 feed. You can leave a response, or trackback from your own site.