Nationally, house prices continued to rise in April, contributing to the overall recovery in U.S. house prices. According to the most recent release by the Federal Housing Finance Agency, U.S. house prices rose by 0.7% on a month-over-month seasonally adjusted basis in April. This is the fifteenth consecutive monthly increase for the House Price Index – Purchase Only. Since January 2012, house prices have risen by 9.9%.

The April increase in house prices was geographically widespread, increasing in every division of the country. As Chart 1 illustrates, the largest gains took place in the Pacific and Mountain divisions, regions of the country containing states, like Nevada and California, that experienced the largest price declines. 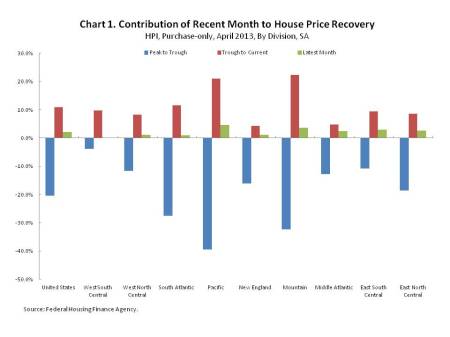 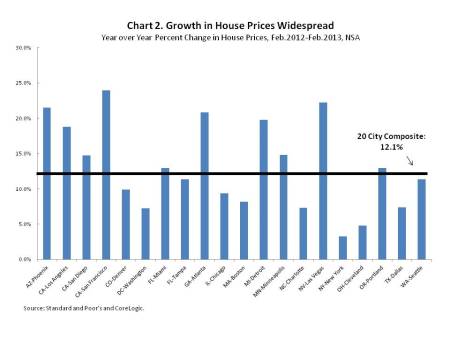 Rising house prices for existing homes, such as those counted in the FHFA and in the S&P/Case-Shiller House Price Indices, is a net positive for the housing recovery. Recovering prices will improve conditions for builders, lead to higher inventories of new construction, and motivate potential sellers of existing houses to come back into the market. Data released jointly by the US Census Bureau and the US Department of Housing and Urban Development showed that newly constructed single-family houses sold at a seasonally adjusted annual rate of 476,000 in May, 2.1% higher than level of new single-family houses sold in April. Going forward we expect house prices to continue to rise, by 9.5% overall in 2013 and by 4.5% in 2014.

For full histories of the 20 markets included in the Case-Shiller composite, click here cs.

For full histories of the FHFA US and 9 Census regions, click here fhfa.

This entry was posted on Tuesday, June 25th, 2013 at 3:26 pm and is filed under By the Numbers, Data. You can follow any responses to this entry through the RSS 2.0 feed. You can leave a response, or trackback from your own site.