The Bureau of Labor Statistics (BLS) released the Producer Price Indexes (PPI) for March. Overall producer price increases have been relatively modest but prices for some building materials have soared in the last year.

The PPI for finished goods decreased 0.6% in March from February (seasonally adjusted) based on declines in energy prices, and prices are up 1.1% from one year ago (unadjusted). In comparison, the PPIs for gypsum, softwood lumber and OSB are up 18%, 30% and 68%, respectively, since last March. 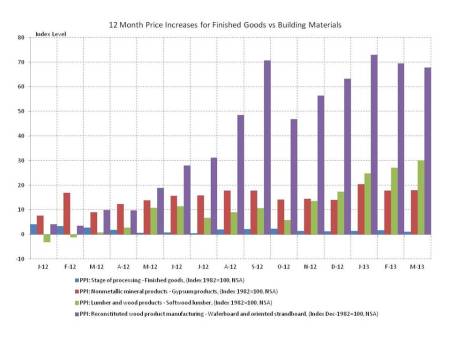 In the case of gypsum and softwood lumber this brings price levels back to 93% of their housing boom highs, OSB (the most volatile of the three) is back to 65%.

The housing recovery that has gained strength since late 2011 is now putting pressure on a home building infrastructure that downsized during the housing bust. The increase in prices reflects the friction as supply chains and distribution networks are rebuilt. Lumber and wood products producers have begun to add back idled capacity but warn the process takes time.

Sharp price declines for these products in the near term are unlikely, but materials price have been vulnerable to market forces in the past. Positive signs for the future include producers’ recognition of the financial incentives to expand output, particularly given how much housing market recovery is still to come. Also, buyers in supply chains have been unwilling to overstock at such high prices. There is an expectation of price declines, the question is timing. There is a lot of uncertainty in the marketplace.

This entry was posted on Friday, April 12th, 2013 at 7:03 pm and is filed under Data. You can follow any responses to this entry through the RSS 2.0 feed. You can leave a response, or trackback from your own site.