The Census Bureau’s preliminary estimate of starts in buildings with five or more apartments for January came in at 260,000 (at a seasonally adjusted  annual rate).  As predicted in last month’s post, a rate well in excess of 300,000 proved too high to sustain.  In fact, the five-plus starts rate for December was revised upward, from 330,000 to 352,000—so the preliminary estimate for January shows up as a 26 percent decline, dropping the five-plus starts rate back to where it was in November.  Month to month fluctuations on this order of magnitude are not unusual in the multifamily construction series, however. 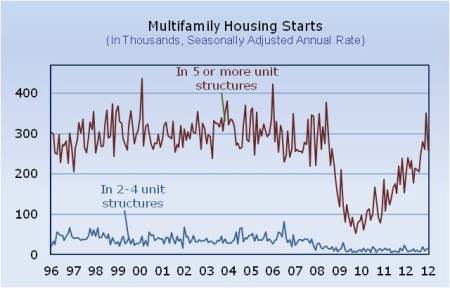 On a year-over-year basis, five-plus starts were still up 35 percent, reflecting the generally upward trend in multifamily production that has prevailed since the end of 2010.

This entry was posted on Thursday, February 21st, 2013 at 12:51 pm and is filed under By the Numbers, Data. You can follow any responses to this entry through the RSS 2.0 feed. You can leave a response, or trackback from your own site.

4 Responses to Multifamily Production Falls Back to November Rate