In December, the (seasonally adjusted) annual rate of starts in buildings with five or more apartments increased by 23 percent from the revised figure for November, to 330,000.  The November figure was revised down substantially, but the big news is that the rate of multifamily production continues to climb, even after the large improvements it made in September and October of 2012—to the point where, at 330,000, the five-plus starts rate is now up 115 percent year-over-year.  Historically, this also marks the first time the monthly five-plus rate has been over 300,000 since June of 2008, shortly before the housing downturn hit the multifamily industry. 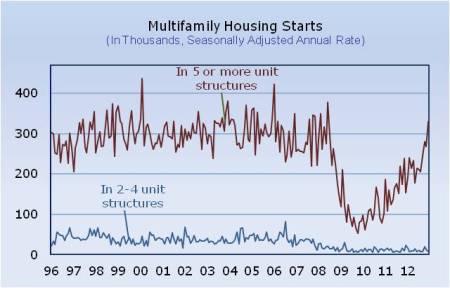 Meanwhile, the rate at which new five-plus permits were issued in November declined by 1 percent to 301,000, while the backlog of unused permits in the pipeline increased by roughly 6 percent, to 46,800 (not seasonally adjusted).  Overall, the December permit numbers were strong enough to indicate that the five-plus starts rate is likely to remain relatively healthy in the short run, although a rate as high as 330,000 may be a little too much to sustain.

This entry was posted on Friday, January 18th, 2013 at 2:38 pm and is filed under By the Numbers, Data. You can follow any responses to this entry through the RSS 2.0 feed. You can leave a response, or trackback from your own site.