Census: An Increase in Multigenerational Households

A recent Census report highlights a component of pent-up housing demand – the rise of multigenerational households.

The Census report indicates a higher share of such households in the American South and the West, with multigenerational household rates of 6.0% and 6.7% respectively. The shares are 4.2% in the Midwest and 5.5% in the Northeast . This is somewhat consistent with a previous look at households containing non-relatives. 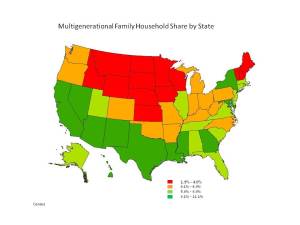 An interesting long-term research question, and one that builders must address in terms of servicing housing demand, is the extent to which these trends represent temporary effects from the Great Recession or long-term changes associated with a changing national population.

This entry was posted on Friday, November 2nd, 2012 at 12:39 pm and is filed under Data. You can follow any responses to this entry through the RSS 2.0 feed. You can leave a response, or trackback from your own site.

8 Responses to Census: An Increase in Multigenerational Households