NAHB recently unveiled an index that tracks housing markets on the mend, the NAHB/First American Improving Markets Index (IMI).  The IMI highlights the fact that housing markets are local and that there are metropolitan areas where an economic recovery is underway.  The index measures three readily available monthly data series that are independently collected and indicative of improving economic conditions.  The three series are employment, house prices and single family housing permit growth.

For the twelfth release , 99 markets are classified as improving under a conservative examination of local economic and housing market conditions.  Among these areas is the Palm Bay-Melbourne-Titusville, Florida metropolitan statistical area (MSA).

The turnaround in the Brevard County economy and its housing market is due to several factors including a steady rise in tourism and recreation expenditures compared to 2010 including a rise of almost 10% in the number of multi-day cruise passenger traffic departing from Port Canaveral.  The area also benefits from its position as a large regional healthcare center with three large healthcare systems including Health First, Inc., Holmes Regional Medical Center and Wuesthoff Health System, Inc., which together employ close to 11,000 persons.  Brevard County is also is home to Patrick Air Force Base, Cape Canaveral Air Force Station, the US Air Force Malabar Test Facility, a naval Trident ballistic missile submarine turning basin and a Naval Ordnance Test Unit.  Brevard County also boasts a large number of high-tech firms such as Harris Corporation, Boeing, Northrop Grumman, Lockheed-Martin, Rockwell-Collins, Honeywell and many other firms that have recently grown and have largely made up for the gradual decline and eventual loss of the Space Shuttle program.

According to home builder David Armstrong, President of Armstrong Custom Homes, “things are definitely getting better.  The combination of an active and aggressive Economic Development Corporation, the creation of the duty-free zone in Titusville and the expansion of many of the high-tech firms here are helping us backfill the loss of the space center.  In addition, the announcement that Space-X will be expanding here has also boosted buyer spirits.  We are also seeing a rise in remodeling.  Many owners now convinced that they will be staying their existing house for a while longer, are adding a second floor and or updating kitchens and bathrooms.  Another factor in the turnaround is that the national news is getting better and buyers are tired of waiting and are not getting younger.”  He concluded by saying “another indicator of our improving economy is the increase in small business activity.  More new business are opening and that too is helping.”

According to Marcia Bartley, President of All Pro Title, Inc., “the inventory of existing homes is declining and that is putting upward pressure on prices.  On top of that there are no spec homes being built and the foreclosures that are on the market tend to be in poor condition and buyers are no longer willing to tolerate the false starts and delays that come with trying to purchase one of them.  As a result of these factors, appraisals are starting to rise and that gives prospective buyers increased confidence and as a result, a feeling of cautious optimism is starting to take hold.”  Whatever the cause, house prices are definitely firming.  They are up 6.4% since the trough in April 2011 and look to continue rising through the end of this year and into 2013 and beyond.

Improving economic conditions have resulted in payroll employment being down less than 11% from its peak in May 2006 and up by 1.3% since the trough in December 2011.  Single family permitting activity is up 2.0% on a seasonally adjusted monthly average basis from the trough set in April 2009.  While new homes are being built in many parts of Brevard County, activity has been primarily centered in the Viera area where there is a new VA clinic, a new hospital, the government center, excellent shopping and is where the spring training home of the Washington Nationals is.  West Melbourne, between Melbourne and Palm Bay, is also a place where new construction activity is pronounced, in large part due to the excellent school system. 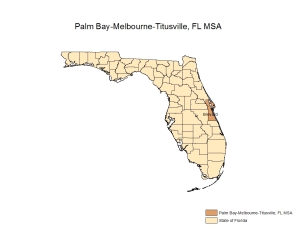 This entry was posted on Thursday, September 20th, 2012 at 1:33 pm and is filed under Uncategorized. You can follow any responses to this entry through the RSS 2.0 feed. You can leave a response, or trackback from your own site.