The Bureau of Labor Statistics reported today that the Consumer Price Index for All Urban Consumers (CPI-U) was unchanged between March and April 2012. Energy prices played a major role once again in shaping the CPI’s trajectory, but this month it put downward pressure on the overall CPI as the CPI for energy slumped 1.7 percent versus March. Gasoline accounted for the bulk of the decline in the broader energy CPI, even though retail gasoline prices actually peaked nationally at nearly $4.00 per gallon during the week of April 9th.

Prices eventually declined 11 cents in the final three weeks of the month, which could have influenced this downward movement in the energy index. With retail gasoline prices falling appreciably in most parts of the U.S. over recent weeks, gasoline could weigh on the overall CPI for May. Natural gas prices continued to pull the energy component of CPI lower. Indeed, the spot price for natural gas averaged $1.95 per MMBTU during April—the lowest level observed since March 2009. 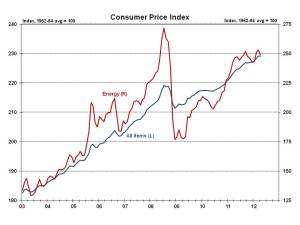 Core CPI, which excludes food and energy goods, increased 0.2 percent on a month-to-month basis in April and rose 2.3 percent versus April 2011. Year-over-year increases in core CPI have generally inched higher over the past 19 months, but at 2.3 percent the rate of growth in core CPI remains quite tame. Housing costs, as measured by the shelter index, continued their gradual march higher by climbing 0.2 percent for the 10th time in the past 11 months and increased a modest 2.2 percent compared to April 2011. With prices for single-family housing beginning to stabilize, rental costs have become a point of focus as households make the decision between owning or renting and as available apartments have become scarcer in recent quarters. NAHB’s measure of real rental rates is constructed from the CPI for rent of primary residences and overall CPI. This index increased 2.1 percent on an annualized basis in April and registered its first year-over-year increase since October 2009. Relatively stronger increases in energy prices had masked the impact of rising rental rates in recent months.

This entry was posted on Tuesday, May 15th, 2012 at 9:10 pm and is filed under Data. You can follow any responses to this entry through the RSS 2.0 feed. You can leave a response, or trackback from your own site.