Another soft result for result for existing homes sales. The National Association of Realtors (NAR) reported sales of existing homes slipped a further 0.8% in June to a seasonally adjusted annual rate of 4.77 million, as contract cancellations spiked unexpectedly. Following very strong growth in the second half of 2010, existing home sales have lost momentum in 2011, as June’s result marked the fourth decline of the past five months.

The housing inventory at the end of June rose 3.3% to 3.77 million existing homes for sale. At the current sales level, this represents a 9.5-month supply, up from a 9.1-month supply in May.

The parallel NAR practitioner survey indicates that the share of distressed homes – sold at a discount – continued to edge down, accounting for 30% of sales in June, compared with 31% in May and 39% in March. The easing of distressed sales has helped to stabilize house prices.  Both the Case-Shiller and the Federal Housing Finance Agency House Prices Indexes ticked up in April, after an extended eight- to ten-month decline.

NAR note that “…. a variety of issues are weighing heavily on the market including an unusual spike in contract cancellations in the past month ….” with “…. 16% of NAR members report(ing) a sales contract cancelled in June, up from 4% in May ….” While NAR are unsure of the reason for the high level of cancellations, they suggest the problems may be related to tight credit conditions and low appraisals. The lowering of the GSE (Fannie Mae and Freddie Mac) mortgage loan limits may also be a factor, with reports that some lenders are already placing the lower loan limits on contracts that may not close before the end of September. The still lackluster economic recovery and, to a lesser extent, the aura of uncertainty created by the debt ceiling debate in Washington are also having a negative influence on home buying decisions. 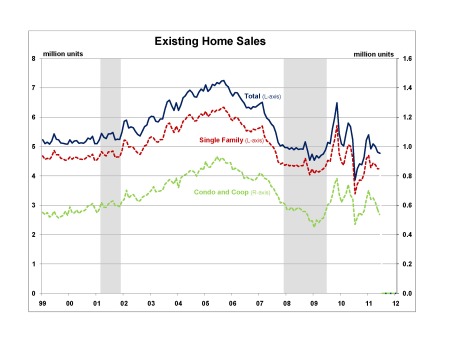 Earlier this year concerns were raised that the NAR’s existing home sales data was showing much stronger gains in the second half of 2010 than other comparable data. The NAR have subsequently undertaken a review of the sampling and methodology used for the existing home sales survey. In a footnote in the current release, the NAR indicate that preliminary data based on a new benchmark will be available for review in August. The NAR advise that with the new benchmark “…. there will be a downward revision to sales volumes ….”, but added that “…. there will be no notable change to previous characterizations of the market in terms of sales trends, monthly percentage changes, etc.” While the preliminary data are expected next month, publication of the new revisions is not likely before this fall.

This entry was posted on Wednesday, July 20th, 2011 at 3:25 pm and is filed under Data. You can follow any responses to this entry through the RSS 2.0 feed. You can leave a response, or trackback from your own site.